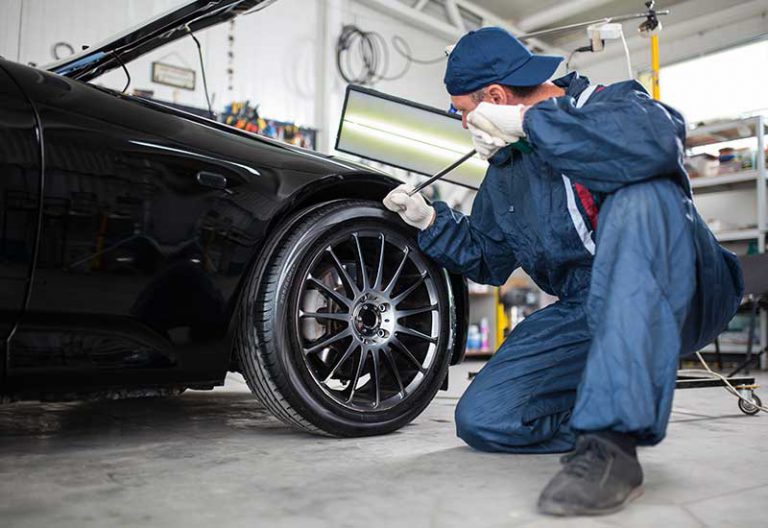 Paintless Dent Repair technicians use specialized tools to push the metal back into its original shape from behind the dent.

Using  the latest technology and tools, skilled technicians can quickly remove many dents on late-model vehicles—without repainting.
All new car owners dread that first dent. No matter how it happens, the first dent can make a person feel that their car will never be the same again.
Or will it?

Many dents and dings can now be repaired without a trace, when the work is performed by a skilled technician. And techniques have developed to the point that dings can be removed with the original paint in place.

Consumer Awareness Increasing
Paintless dent removal (PDR) has become widely used over the past decade by car dealers, rental agencies and auctions to prepare vehicles for resale. Yet very few consumers are aware the process exists

Specially fabricated tools and techniques for PDR have been developed to remove dents, often up to the size of a football, from almost any body panel of a vehicle. No sanding, body filler or repainting is necessary. In most cases, when the process is complete the dent is no longer visible.

“The general public is not aware that paintless dent removal is even available, said Cmelik. After performing traditional auto body repair for 26 years, Cmelik’s shop has focused exclusively on PDR for the past six years.

PDR is becoming more widely used, because the size of dent that can be repaired has increased over the last few years.
The widespread use of high-strength metal and resilient paint finishes has allowed PDR to become a viable alternative to traditional body repair techniques. In fact, some insurance companies will even waive the deductible if PDR is chosen over more traditional techniques.

What Can Be Fixed?

Paintless dent repair is very effective for the following situations:

PDR is so effective for hail damage that some insurance companies use “hail teams” that “chase hail.” These teams travel to an area that was hit by hail to repair vehicle damage using PDR techniques.

Admittedly, not all damage to the body of a vehicle can be repaired with PDR techniques, but if a dent cannot be removed completely, often the repair will make the damage almost unnoticeable.

A number of advantages for paintless dent repair include:

A vehicle with original paint retains a higher value than a repainted vehicle. Even if it is just a door or a fender, it is always preferable to maintain the original paint on a vehicle for as long as possible.

How Is It Done?

PDR technicians use specialized tools to push the metal back into its original shape from behind the dent. Depending on the location of the damage, the panel is accessed by removing trim pieces, through window openings or by removing inner panels.

Ryan Snider, who performs PDR for Barrier Motors in Bellevue, WA, told MSN Autos, “You need to be able to ‘read the paint’ to see where the dent ends and then you have to understand where the tip of the tool is. From that point it is 75 to 80 percent flat-out patience.”

Most repairs can be completed in one to two hours, and many PDR companies offer mobile service to save even more time.

Prices vary depending on the location and complexity of the repair. A general range would be £75-100 for a single dent,  This compares with a cost of several hundred to repair and repaint a single dent using traditional auto body repair techniques.

PDR is available from local franchises of national chains, independent shops, and some auto body repair shops or automobile dealers. A quick search of the local yellow pages or other business directories should yield several options.

As with any type of service, there can be a wide range of experience levels and work quality. So it’s a good idea to check with reputable vehicle dealers—they’ll know who does quality PDR work in the area.