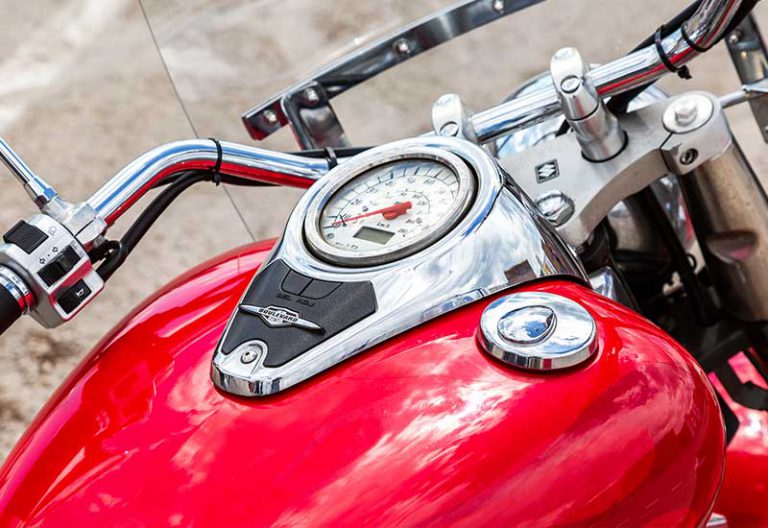 How Can You Remove A Dent From A Motorcycle Tank?

You may be wondering, “How can you remove a dent from a motorcycle tank?” It’s a good question, and one that has puzzled many people over the years. Specialists in this area of dent removal have got it down to a fine art these days. Their dent removal techniques are just like magic.

How can you remove a dent from a motorcycle tank? By going inside to push out, or by going outside to pull out, either way the dent gets removed.

Motorcycle gas tanks have their caps on the top, usually at the highest point. That way they can be filled to the maximum. Unfortunately, the gas caps on motorcycle tanks are not large openings.

Some motorcycle gas tanks are double skinned. It’s a bit like having a tank inside a tank. This kind of gas tank makes it difficult to remove the dent from the inside as you will be applying pressure to the inside metal skin, and not the outside metal skin where the dent actually is.

However, if the tank has a single wall, or metal skin, then the job becomes very easy. Well, easy in the hands of an expert at least. The first thing done is to attach an object a bit like a flag onto the tank. This has a flexible mounting that can be adjusted to any angle, and at the end is a rectangular flag-like card with parallel black lines running the length of it on a white background.

As the dent is massaged and caressed from the inside, using a special tool designed for removing dents in motorcycle gas tanks, the reflected black lines in the region of the dent will become less and less ballooned and distorted. By the time the technician has completely removed the entire dent, the reflection will be smooth and perfect.

Of course, the actual surface of the motorcycle tank is constantly checked as well for smoothness. But the reflections of the black lines is arguably the best visual and actual guide as to the presence or otherwise of the dent. Properly performed, the dent will vanish completely and the repair will be wholly invisible. That’s the mark of a good motorcycle dent removal – nothing left to see.

The days of answering the question of, “How can you remove a dent from a motorcycle tank?” by removing the tank, rubbing it down, or removing the paint with stripper completely, then applying filler, rubbing that down before re-spraying the entire thing has all but gone.

Today’s expert technicians use paintless dent removal techniques. They attempt to leave the original factory paint exactly as it is. They also attempt to remove the dent with leaving a mark, and more often than not they succeed.